These are all synonymous with those that have an over active sebum gland in the hair and scalp. However, it doesn't always stop there. Many have the same situation with the over oily production on the face, forehead, back, chest, in the eyebrows, around the nose, behind the ears and just about any other crack and crevice that you can think of. It is important and very natural for the body to produce sebum but excess amounts can cause of a lot issues.

Does Excess Sebum Cause Inflammation?

Yes, and in more ways that one. The term hyperseborrhea and it means just like it sounds. It over does it. The sebum itself is not always bad but it almost always turns out to be a problem. Don't worry we are going to tell you how to handle it.

There are a couple of things about the hair and follicles that you should know. Excess sebum on the scalp can be bad because the fungus, bacteria and yeast seem to have a field day when it is in excess. Mixing yeast, fungus and sweat can cause a build up of scalp gunk or white gunk that can be in the hair or on the scalp itself. It almost seems like large chunks of dandruff. It can cause itching, flaking, redness.

But one of the most important things that it does is help to clog the hair follicle. And when mixed with all the dirt, grime, sticky hair spray, gel, styling aids and even shampoo residue that sebum can be hardened and feel like hard rock candy with a little bit of sticky and a lot clog to it. These do clog the follicle and this allows the yeast, bacteria, and fungus to thrive and with that comes inflammation. The enzyme that feeds the hormone dht also feeds off of the excess sebum. So if you are susceptible to DHT = the hormone that causes hair thinning and loss in both women and men then you may notice happen.

This is why many people talk about oily itchy scalp and thinning hair or loss. Many people with seborrheic dermatitis also complain of thinning because of these same 3 things. The first is inflammation inside the hair follicle and the 2nd is that it feeds the enzyme that converts testoterone to dht which is the hair loss hormone and 3rdly it and 3rd bacteria dn fungal overgrowth that breaks down the micronutient process of actually feeding the hair follicle.

Why Do We Know So Much About Scalp Gunk and Excess Sebum Oils?

We lived it. Yes, the reason that we can explain all of this in great detail to you is that we had the exact problem and probably a little more in depth since many of us also have scalps sores, intense itching and flaking on the hair line, the crown of the head, pimple like bumps on the back of the head that itched unmercifully. I personally had hot spots that would burn and itch on my scalp. I found out that I had clogged hair roots and was harboring some serious bacteria and fungus. Since then I barely deal with my problem any more of hyperseborrhea and itching because of the hyperseborrhea shampoo we developed. I did it a lot of research and some help from giants in the industry on the research side. I did it with a blend of herbs and a magic ingredient called zinc pca.

Now my problem is behind me 99% of the time. Every once in a while I will have a flare up but my hair is so much healthier and grows better. Since I started using this when I was 27 I have almost the same amount of hair thinning that I did. This stopped the appearance of seborrheic dermatitis hair thinning in its tracks. I believe because it was mainly due to the inflammation inside the hair follicle.

I started seeing results in about 2 weeks with what is Now Called Zincplex but in reality about a month. Remember that you have to restore lipid barriers, change the ph, irrigate the hair follicle. This takes some time so give it some time. But a lot of the results will also happen quickly. Enough to let you know that The Zincplex shampoo, Conditioner, Hot Spot Scalp Lotion, Face Wash are the best products for Hyperseborrhea, Seborrheic Dermatitis and Clogged Hair Follicles. Don't clarify - detoxify! 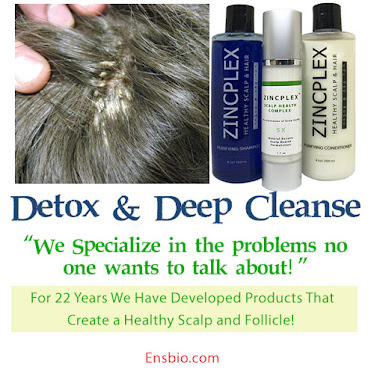 Posted by Elizabeth Jane at 1:05 PM No comments:

What is the Best Shampoo for Oily Thin Hair?

What Shampoo Do I Use For Thin Oily Hair

When were were developing Zincplex one of the things that we really took into account was for those that wanted to thicken their hair and still deal with greasy hair and scalp. So in the oily hair care line that we did we added one of the best thickening agents you can add to a shampoo and it's not cheap. Panthenol. But there are different forms of this vitamin.

What Is Panthenol and How Does It Help Thin Hair?

It helps strengthen the outter and the inner part of the hair shaft.  It does retain moisture at levels similar to hyaluronic acid,  and improves the overall feel and texture of damaged hair. Panthenol is available in many different levels of quality and of course as you know not all of these will give you the desired results that you might be looking for.

One of the reasons that we use form of vitamin b-5 is because it works from the inside of the hair shaft out. This is vital if you are trying to plump hair. If you coat it the hair just simply weights down. We want thicker, full of style hair that is plump and thick but not coarse and lifeless.

Over time excess scalp oils can lead to a lot of different problems including white waxy build ups and gunk, hair thinning and loss, out of balance yeast, fungus and bacteria and more. Our Zincplex shampoo and conditioner both use Panthenol to fill the hair from the inside out with moisture and fluff with panthenol vitamin but we also use Zinc pca to limit the amount of oil that the scalp and hair has produced for it. This is big for those that have oily thin hair.So if you are asking what is the best shampoo for oily thin hair then check out the Zincplex Purify shampoo and see why that is the top seller for people with scalp problems such as oily, seborrhea, hyperseborrhea, seborrheic dermatitis, oily dandruff and even hair thinning with greasy hair issues. These can all be combined to create problems. See how Zincplex deals with these problems using natural and herbal ingredients.

Posted by Elizabeth Jane at 9:09 AM 4 comments:

What is The Best Clarifying Shampoo for Product Build Up

What Are The Top 3 Clarifying Shampoos?

The answer is that we don't know but before you leave understand that you don't want a clarifying shampoo. There I said it. That is not what you want. Why? Clarifying Shampoos simply strip everything away including the most important outter layer of skin that it is the #1 protector of your scalp in many ways. It is the lipid barrier so it holds moisture in and keeps bacteria and fungus at bay. Fungus like the same fungus that causes dandruff and other scalp conditions. You want scalp buildup removal without the harsh damaging effects. But how?

What Shampoo Will Deep Clean Without Stripping and Remove Product Build Up Without Destroying The Lipid Barrier.

Now that is a much better question. A large portion of that is going on with hair problems to day is because of fungal and bacterial being aggressive an the normal balance swinging to their side. When the scalp is healthy, the ph of the scalp skin correct and the follicles open then scalp problems are kept at bay.

What Shampoo Do We Use To Melt Away Scalp Build Up Including Years of Sebum, Product Residue and More?

Zincplex! Without A doubt, hands down, the best way to deep cleanse, restore balance and allow proper balance with ph and fungal growth to occur. The researched blend of herbs is just that. Researched for nearly 20 years now and tweaked each year to be able to dissolve the excess sebum build up. Zinc pca is a known and proven anti fungus and anti bacterial natural ingredient. The synergy of these natural ingredients beats the harsh stripping and we guarantee that you won't have to deal with the issues that happen after using harsh clarifiers on your scalp and hair.

Go to Zincplex Website at ENSBIO.com to see Before and After Hair Root Pictures

We have searched and have not found any other company that shows before and and after hair root pictures of those that have used the product to remove the sebum build up, scalp plugs and clogged hair follicles like Zincplex does. You can see the results as far down as the root of the hair. This shampoo is more than a fresh start. It is a clean start for optimal hair growth.

Try Zincplex Today and Let It Remind You Of What A Super Healthy Scalp Feels Like. And with that comes healthy hair growth. There are a lot of hair issues that come with product build up and the chain of events that happen if the root is not cleansed. Try It Today. There are quite a different places to buy Zincplex online. Great for women and men and hair types from normal to oily and even super greasy. Guaranteed Results. 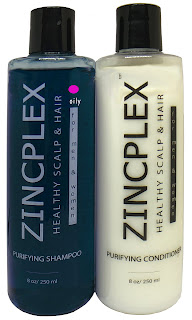 If you are having a lot of scalp issues and your hair is more on the dry side or maybe you scalp is then you will want to try the jojoba deep scalp cleanser with argan oil that is also made by Zincplex.

Posted by Elizabeth Jane at 5:46 AM No comments: